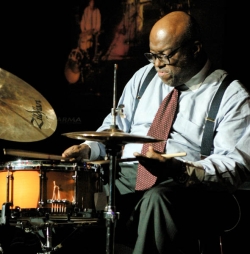 BLUES FOR A WORD SORCERER

Alas, the sad news has reached my ears that Stanley Crouch, a unique tribune of our times, has danced and joined the ancestors. A poet, essayist, dramatist, short story writer and novelist. Stanley was by any objective measure a GREAT writer. A native of South Central Los Angeles, Stanley began writing for the theater in a company that grew out of the great Watts riot of 1965. When I met him in 1968, he was a Poet in Residence at Pomona, one of the prestigious Claremont Colleges, just outside LA, popularly known as “The Harvard of the West.”

I was visiting the school as a guest lecturer to help make the case for the importance of Black Studies, add Stanley was part of the black campus movement attempting to establish a Black Studies Department. At the time he was a militant Black Nationalist, decked in a dishiki, dark shades with a big Afro, and had just produced a collection of weaponized words, radical poems titled: “Ain’t No Ambulances for No Niggers Tonight!”

It was clear that Stanley shared the view of writing advocated by the peerless word warrior, Ishmael Reed: “Writin is Fightin.” And although he would eventually reject Radical Black Nationalism, and abandon his leftist literary comrades, he remained a literary pugilist who would later skewer those comrades in a critically acclaimed collection of essays: “Notes Of A Hanging Judge.” For which he was awarded the highly prestigious “MacArthur Genius Award.

Stanley would become one of the most decorated writers in American letters. Primarily an essayist, Stanley wrote on a variety of subjects, but his greatest distinction was as a masterful critic of the quintessential American art of Jazz, which he correctly viewed as the great contribution of US civilization to the canon of great art. I discovered his love for Jazz the first time we met.

After my speech he invited me over to his crib to hang out, and he had a set of drums in his living room. Having once played the drum kit myself, but had long abandoned them for the Afro-Cuban Conga drums, I had remained a fan and was interested in hearing him play. He put on a record and began to play along. He said he was working on “some different stuff,” that he was not ready to reveal. Among the students hangin out was the young lady who later became the famous television star “Judge Mable, and a young saxophonist I believe was Davis Murray, who became one of the truly original voices on the tenor sax.

After that visit I didn’t see Stanley again until about six years later, when we met again in New York. But I had followed his brilliant column “Crouch on Jazz,” which was published in Players magazine, a black version of Playboy. I thought they were the most elegantly crafted insightful was essays I had ever read on the art of Jazz. There was a grandeur to his conception of the music that set his writing apart from the common lot of critics, even in the Big Apple, where good writers are common fare.

Crouch’s writings on Jazz conjured up the observation of Zora Neal Hurston in a letter to James Weldon Johnson – two great early 20th century Afro-American writers who migrated from Northern Florida to the Big Apple just like me – when she said: “We are a people who love magnificence and cannot get too much of it.” In New York he joined the staff at the Village Voice, an incubator of great music critics.

From his conspicuous prestigious perch at the Village Voice, Crouch quickly became the most outstanding Jazz critic in the big Apple…the world capitol of Jazz. And his influence became such that Stanley an intellectual mentor to the trumpet genius and brilliant composer Wynton Marsalis, and was a major force in the creation of “Jazz Lincoln Center,” the nation’s most important monument to Afro-American culture!

Known as “the writer’s paper,” and the “home of the New Journalism,” the Voice, with its reverence for fine English prose and creative storytelling, was the perfect place for Stanley, as the editors prized the individual writers voice – especially the great Bob Christgeau, who edited Stanley’s finest essays penned during his tenure at the voice. Several of which ended up as award winning anthologies.

Stanley really blossomed at the Voice, as he branched out from Jazz criticism and wrote about art, literature and politics. Although the subjects of his interest changed, his poetic style didn’t, concocting a prose style that prized poetic simile and metaphor. Often his prose seemed to dance off the page, animated by the polyrhythmic phrases.

A lover of literature, I was bewitched by Stanley’s compositions and avidly read his texts. In conversations about various and sundry issues, Stanly began to chide me about writing more, At the time my writing was limited to a few academic treatises published in obscure journals, and the lyrics to songs I had written for a great singer with whom I was smitten.

Stanley began to chide me to write more. He would say: “Listen man, it would be so easy for you because you speak in essays.” I was a voracious reader, and I was always telling him about something I had read. But one day he said to me: “You know why you read so much? Because reading is a lot easier than writing!”

He badgered me until I began to take myself seriously as a writer. And once I started I have been unable to stop having now written hundreds of serious essays…1000 of them posted at www.commentariesonthetimes.wordpress.com.  (However at present I have a dispute with WordPress and the site is suspended, which is why I started this blog) I have written for some of the finest publications in the English language, here and in England. Along the way I have won several awards, and two Pulitzer Prize nominations for Feature Writing and Distinguished Commentary.

The nominating letters are posted on by bio here. Had it not been for Stanley’s insistent prodding and encouragement, I might never have pursued a writing career. We became serious intellectual sparring partners for years.

In 2003, Stanley and I was commissioned to write a book commemorating the 100th anniversary of Dr. WEB DuBois’ classic American text: “The Souls of Black Folk.” Since I was a co-founder of the WEB DuBois Department of Black Studies at the University of Massachusetts in 1969, one year after our first meeting – the first free standing, degree granting, Black Studies department in the world, and acquired Dr, DuBois’s voluminous papers – and held a professorship in history there, we agreed that I would write the historical overview, reconstructing the intellectual milieu, in the US and Germany – that shaped DuBois’s education and worldview.

Reconsidering The Souls of Black Folk” consists of two complex essays in intellectual, cultural and political history and criticism centered around the historical context, text and legacy of “The Souls of Black Folk” and its brilliant author. The book was selected for discussion at the opening session of the National Black Writers Conference, sponsored by Medgar Evers College in Brooklyn, and hosted by the Studio Museum of Harlem. C-Spans Book World covered the event, and I have appended the link to their video below.